For those who have either lost a limb or were born without a whole or partial one, using a prosthetic hand can help improve their lives. Depending on how the person plans on using their prosthetic or terminal device, they can choose from a variety of options that range from an arm hook to an advanced engineered hand with functioning fingers. In this article, we’ll discuss the different types of prosthetic hands and hooks, known as terminal devices, and how they can help improve the lives of those without an upper limb.

What Is a Prosthetic Hand or Arm Hook? 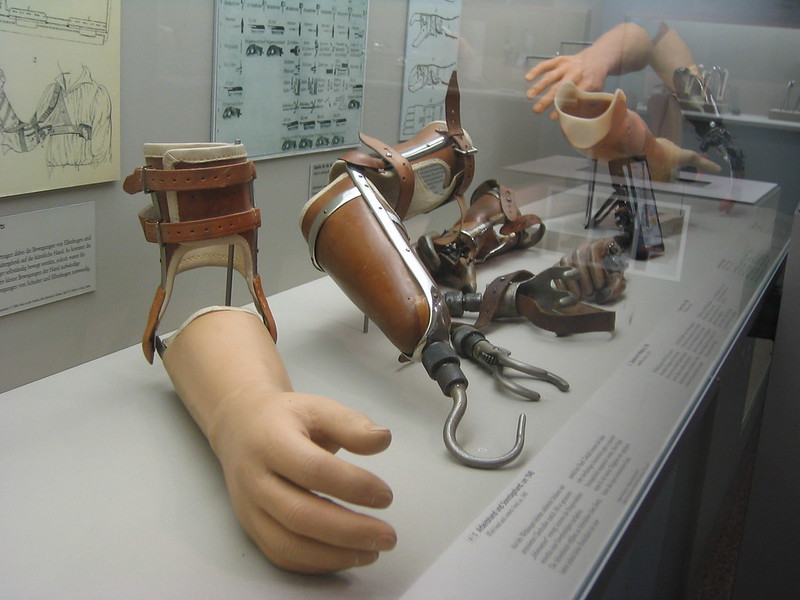 Used mostly for cosmetic purposes, passive terminal devices don’t actively move, yet are made to resemble the hand and forearm.

This common type of prosthetic hand, including most arm hooks, use a series of cables linked between the terminal device and a harness worn by the user. As the person lifts their arms or shoulders, the device moves, thus calling it a body-powered prosthetic.

For more functionality, electric-powered devices use signals from the nerves in the limb to move the arm hook or prosthetic hand. Rechargeable batteries supply power.

Advancements in biomedical engineering have created bionic limbs that use computer software, gyroscopic sensors, and electrodes to help the user move the terminal device. When the person flexes their muscles or thinks about moving their hand, the bionic limb responds immediately.

Arm hooks are very functional and through a series of tension bands, the user can open them as needed. Advanced arm hooks use myoelectric signals with electrodes and batteries, which can give the user better control for picking up delicate items like a raw egg.

The History of Prosthetic Devices

While the image of someone wearing an arm hook may conjure up scenes from a pirate movie, prosthetic arm hooks and devices have been used functionally for thousands of years.

The first recorded prosthetic discovered was actually an artificial toe found on an Egyptian noblewoman well over 6,000 years ago. While finding a prosthetic big toe may not sound overly exciting, the big toe was necessary to properly wear the type of sandal used by Egyptians between 9510 and 710 B.C. Throughout the decades, knights and soldiers used passive prosthetics to help them ride horses and return to battle.

After the numerous limb losses that occurred during the American Civil War, World War I, and World War II, prosthetic devices, including arm hooks, became more advanced. However, because these terminal devices were often made from wood, leather, and heavy steel, they were unwieldy, often uncomfortable, and hard to keep clean.

In 1912, David W. Dorrance patented the first split-hook design. This type of hook allowed users to pick up objects, squeeze them, and hold items like a knife or fork. This split-design arm hook works with a system of cables to create a body-powered device. The user wears a harness with cables that attach to it and end at the hook. The two-pronged hook mechanically opens when the user moves their shoulders or upper arms and then automatically closes when tension is released.

While arm hooks all have a split two-prong design, they come either canted or straight. PVC plastic, stainless steel, and aluminum alloys are the most common materials used to make modern arm hooks. These materials are lightweight and easy to clean, helping to make them user-friendly. Users can operate arm hooks either with body power or with electrical power.

The age and use of the arm hook determine which type and size of this terminal device are most appropriate to use. Infants, children, and youth can use small hooks with a PVC plastic coating that helps attach to the limb. Small boys, girls, and smaller-sized women can use a hook made from stainless steel or aluminum, and adults get a large-sized hook made from one of the aforementioned metals.

In general, an arm hook is used for a specific purpose, such as grabbing or pinching an item or holding a nail or tool. In this case, a person would use a handyman’s hook. Adult sized-arm hooks come in two basic configurations:

The canted or overhanging style of arm hook allows users to clearly see the object they need to pick up or hold. They are good for tasks such as picking up a bag, holding a dog’s leash, or holding a tool. However, they don’t have the precision to pick up very small items, such as pushpins or sewing pins.

The straight two-hook design works well when reaching for and grabbing a bottle or cylindrical-shaped item. The straight shape may be a bit harder for the user to see the object, but it does allow for easier grasping of small and delicate items, like a pin.

Accessories To Go With an Arm Hook

Often, someone who uses an arm hook may want to swap this type of terminal device for another, such as a passive prosthetic hand or a different type of hook. In this case, wrist attachments can help to make this transition of devices possible. Users can add a wrist rotation and flexion attachment for better overall wrist movement. Using a quick-change attachment can help the user interchange terminal devices without having to unthread and rethread the new one. Instead, with a push of a button, the arm hook or prosthetic hand can twist in and out with ease.

Depending on your needs and lifestyle, having an arm hook is an option for a terminal device of the upper limbs. For more advanced prosthetic hands, you have a large range of options that can help to improve your everyday tasks, activity-specific tasks, and cosmetic appearances. If you or someone you know needs more information about arm hooks or other prosthetic devices, feel free to contact our professional team at Scheck & Siress, so we can discuss the best option and solution for your needs.